Liputan6.com, Jakarta - The Covid-19 vaccine is hoped to be a way out of the global pandemic as it turns out that the herd immunity method like the one Sweden tried has failed. Expecting Covid-19 to disappear in the near future, is impossible.

The Indonesian government hopes that the Covid-19 mass vaccination can start in December 2020 or January 2021. Five other countries have also stated the same. The United States, Germany, Russia and Britain plan to do so next month, while Spain is at the start of New Year.

Officials may make policies, but the problem is, do people want to be injected?

Based on the Public Perception survey regarding Covid-19 Vaccination conducted by the Ministry of Health and the Indonesian Technical Advisory Group on Immunization (ITAGI) in September 2020, the majority of respondents were aware of the vaccination plan.

As many as 64.8 percent wanted to get the vaccine, while 7.6 percent refused, and 26.6 were in doubt. Meanwhile, 1 percent of respondents did not return an answer. As of now, the pros seem to go beyond the cons and the doubters. 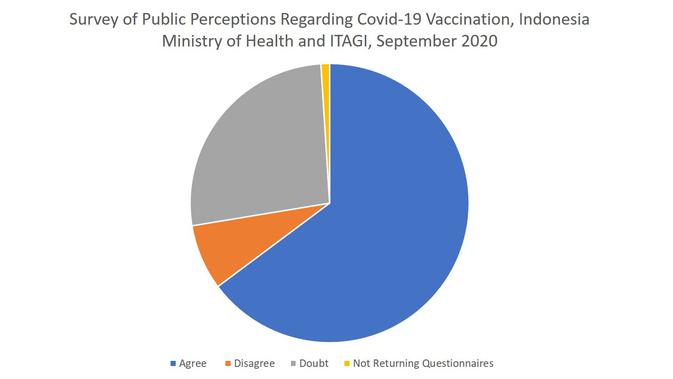 However, level of Perception is not a steady matter. This is as revealed in the Ipsos and World Economic Forum survey of more than 18,000 adults in 15 countries, which unfortunately does not include Indonesia in it.

As many as 73 percent of respondents answered that if possible, they would like to receive the Covid-19 vaccine. This figure is 4 percent lower than a similar survey conducted less than three months earlier.

Surveys can indeed be indicators, but monitoring from social media can also provide comparative insights. Liputan6.com took data from Facebook and Twitter to find out the sentiment and perception of netizens on the issue of the Covid-19 vaccine.

To monitor conversations about the Covid-19 vaccine on Twitter, we used the Drone Emprit Academic social media monitoring tool, which is supported by Indonesian Islamic University (UII) Yogyakarta. The data collection period is from August 25 to November 25, 2020.

During that period, Drone Emprit Academic recorded more than 120 thousand tweets related to the issue of Covid-19 vaccine. The sentiment of the conversation was divided into tweets that were negative (34 percent), positive (42 percent), and neutral (24 percent).

However, sentiment during the period mentioned above was also volatile. While there are some days when negative tweets dominate the conversation, there are also days when positive or neutral tweets are more dominant.

Next, we tried to monitor the conversations more specifically by using keyword filters: China, Tiongkok, Sinovac, Sinopharm, Cansino, with data retrieval period ranging from November 1 to 25, 2020. Due to technical constraints, we did not record conversations related to this topic in the same period as the conversation about Covid-19 vaccine in general, which has been monitored since the beginning.

According to the data we found, conversations about the issue of Covid-19 vaccine from China were dominated by negative sentiment (66 percent), followed by positive (32 percent) and neutral (2 percent) tweets.

During the data collection period, it was visible that negative sentiment tended to be more dominant, except in the middle of this period when positive sentiment had momentarily risen and peaked.

Apart from sentiment analysis, Drone Emprit Academic also allows Liputan6.com to find out the emotion behind a tweet. The graphic below presents the emotions of some tweets regarding the Covid-19 vaccine issue in general. It appears that the most dominant type of emotion is Anticipation, followed by Trust, Joy, Surprise, Fear, Anger, Sadness, and Disgust. Then for the topic of Covid-19 vaccine from China, Anticipation is also the most dominant type of emotion, followed by Joy, Fear, Surprise, Trust, Anger, Sadness, and Disgust. The top influencers on conversation about Covid-19 vaccine in general are President Joko Widodo; West Java Governor Ridwan Kamil, who participated as a volunteer for a vaccine trial; Dirga Sakti Rambe, Indonesia's first doctor and vaccinologist who graduated from the University of Siena, Italy; Tirta Hudhi, a graduate of the UGM Faculty of Medicine, who now runs a shoe-washing business and is very active on social media; Hidayat Nur Wahid, a politician and member of Commission VIII DPR RI from the Prosperous Justice Party (PKS) faction; Pandu Riono, an epidemiologist at the Faculty of Public Health, University of Indonesia (FKM UI); Fadli Zon, a politician and member of Commission I DPR RI from the Gerindra Party faction; and several other accounts as shown in the Social Network Analysis graph below.

One thing that stands out is that Hidayat Nur Wahid (@hnurwahid) has consistently spoken out loud about the Covid-19 vaccine from China. On August 25, the PKS politician shared an article quoting an epidemiologist's statement who advises Indonesia not to depend solely on China. This tweet has accumulated over a thousand responses.

Two days later, Wahid who is Deputy Chairman of the Indonesian People's Consultative Assembly for the 2019-2024 period, also quoted an article which said Russia offered Sputnik-V vaccine for Covid-19 to Indonesia at a low price.

"If it is true and fact that the vaccine trial from China has not resulted in any success, the government should cooperate with Russia, as well as with Australia, South Korea, Britain, and the US to procure a vaccine," tweeted Wahid commenting on the news, which received more than two thousand responses.

Why does Hidayat Nur Wahid criticize vaccines, or is he part of the anti-vax group?

"No, I’m not anti-vaccine. Surely we support vaccine, it is impossible not to support it because one of the solutions for Covid-19 is vaccine," Wahid told Liputan6.com, Tuesday (11/24/2020) night.

Even so, he said that the government should put more effort in doing health protocols and other measures since a vaccine has not yet been found.

According to Drone Emprit Academic data, the specific conversation about Chinese vaccine from November 1 to 25, 2020 involved more than four thousand tweets.

In this conversation, Hidayat Nur Wahid has again become one of the top influencers.

The news about Brazil cancelling order for China’s vaccine is indeed one of the triggers of conversation on this topic. Then Peru did the same. Tweets from official accounts of local mainstream media, who reported this news on Twitter, were widely responded by netizens as shown below. 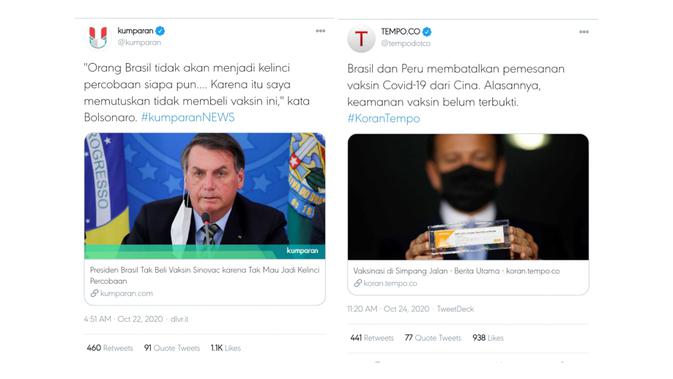 Our findings on this issue are that there are many accounts which enliven the hashtags #VaksinAman (#VaccineisSafe) and #UjiKlinisAman (#SafeClinicalTrial) created in September and October 2020. Many of these accounts have no followers at all, and some even use the default profile picture. 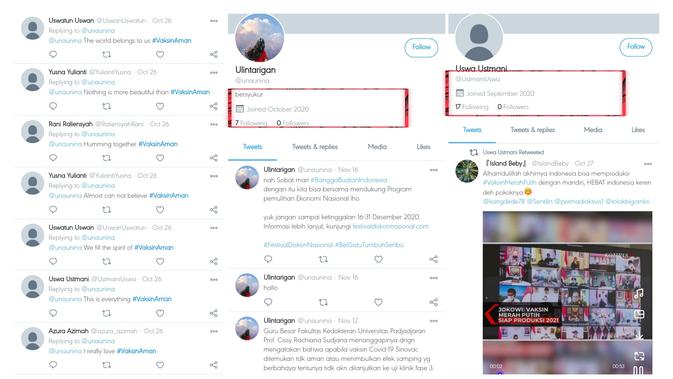 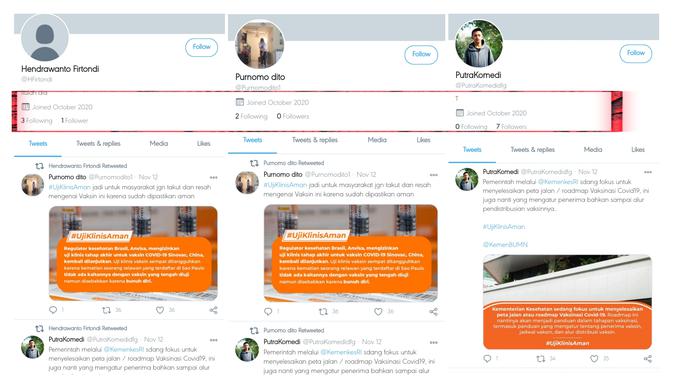 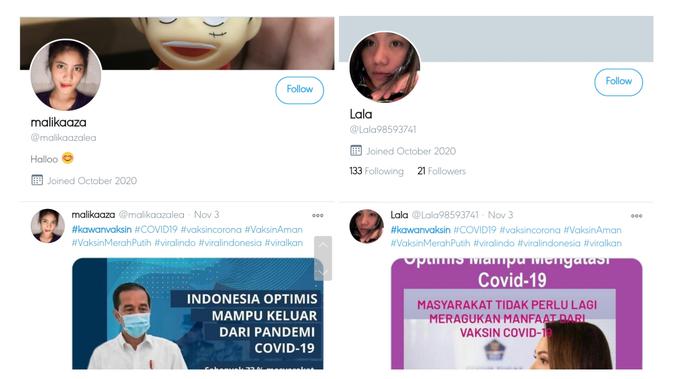 Another interesting finding is that accounts from "alternative media" such as @OposisiCerdas [oposisicerdas.com] and @geloraco [gelora.co] are also quite active in this conversation. Liputan6.com embeds the term "alternative media" because they do not include the composition of their editorial staff or exact address.

Currently, @OposisiCerdas and @geloraco have more than 50 thousand and 180 thousand followers, respectively. Therefore, it is not surprising that both accounts are also included as Top Influencers.

Using CrowdTangle, a tool that records public conversation owned and operated by Facebook, we looked for posts about Covid-19 vaccine on Facebook which has the highest interaction.

For the issue of Covid-19 vaccine in general, there were a thousand posts recorded which also generated more than five million responses from Facebook users (likes, comments, etc).

The official pages of mainstream media, including Liputan6.com, were among the largest contributors to post about this issue on Facebook from August 25 to November 25, 2020.

Based on data, pages which share the most information related to Chinese vaccine in the period of November 1 to 25, 2020 are also dominated by mainstream media, including the Indonesian version of China Xinhua News.

Public sentiment and perception regarding Covid-19 vaccine, especially on social media, appear heterogeneous. In general, the positive response still dominates, but there are also many negative and neutral responses.

Interestingly, based on the data, there are a number of factors that affect the sentiment of netizens’ perception; namely the opinions of public figures, mass media coverage, events in other countries, as well as bot and anonymous accounts that are suspected of being related to certain agenda settings.

Target Vs. Realization of Covid Vaccination in Indonesia

The Covid-19 mass vaccination in Indonesia is scheduled for December 2020 or January 2021. What vaccine will be used? Not known. Until now, all vaccines are still in candidate status.

So far, the commitment to procure Covid-19 vaccine in Indonesia has only been done through a cooperation with the Chinese pharmaceutical company, Sinovac. Phase 3 clinical trial of the Sinovac vaccine candidate is being carried out by a team of researchers at Padjadjaran University, Bandung. If successfully developed, the Covid-19 Sinovac vaccine will later be produced by Bio Farma.

The government continues to cooperate with other countries to procure the Covid-19 vaccine. The latest is with vaccine manufacturers Pfizer and AstraZeneca. However, Bio Farma through Operations Director Rahman Roestan said that the potential for this cooperation is still being studied, one of which is about distribution, considering that Indonesia is an archipelago and tropical country.

"It is not only a matter of speed and adequacy, but also practicality in the field, and whether it is technically possible for the vaccine to be distributed to various provinces," he said.

If the government can bring in a ready-to-use vaccine in the near future, the National Agency of Drug and Food Control (BPOM) is ready to provide assistance regarding quality, safety, and efficacy for the Covid-19 vaccine that will be used in Indonesia from wherever it comes from.

"Whatever decision the government takes about which vaccine that will enter Indonesia, we are ready to assist. Assessing the aspects of its quality, safety, and efficacy," said the Head of BPOM Penny K Lukito in a virtual press conference regarding Covid-19 vaccine after visiting Bio Farma on Thursday (11/26/2020).

BPOM can provide an Emergency Use Authorization (EUA), even if the Covid-19 vaccine has not conducted any clinical trial in Indonesia— provided that the vaccine has been properly assessed in other countries, so that the data can be used by BPOM to obtain a permit validity for use in Indonesia.

"If the vaccine has been reviewed by the drug authority of a country, and of course through a good evaluation process, such as in the US FDA and several other countries that are our reliance, we can also give an Emergency Use Authorization," she said.

Referring to the WHO Emergency Use Listing Procedure (EUL), the US Food and Drug Administration (FDA), and the European Medicines Agency/EMA (Conditional Approval), there are several conditions that must be met so that BPOM can give permission for an emergency use for Covid-19 vaccine. The requirements are that vaccine must have complete data on phase 1 and 2 clinical trials, as well as interim analysis data for phase 3 clinical trial. Last but not least, the vaccine will need to show a data of at least 50 percent efficacy.

Even later when it has received an EUA, further clinical trial for the Covid-19 vaccine will still be carried out.

"Clinical trial will continue even though Emergency Use Authorization has been given. Trials for vaccine to obtain data related to their efficacy will continue, and BPOM will continue to oversee," said Penny in a virtual press conference from the BPOM office, Jakarta on Thursday (11/19/2020).

Supervision along with the monitoring team for Adverse Event Following Immunization (AEFI) will also be carried out in order to assess the safety of the vaccine.

Apart from EUA, Penny said that there are other alternatives for vaccine use in emergency times that were also provided by WHO, namely Compassionate Use. This permit is given to drugs or vaccines that are still in development, but have sufficient data related to their quality and safety even though no efficacy has been shown.

"Compassionate use can be granted if there was a request from the Ministry or Health Facilities in order to expand access to test drugs or vaccines for restricted purposes," said Penny in a work meeting with Commission IX of the Indonesian People's Representative Council, Tuesday (11/17/2020).

The framework of compassionate use was also used for Ebola and Yellow Fever vaccines in America.