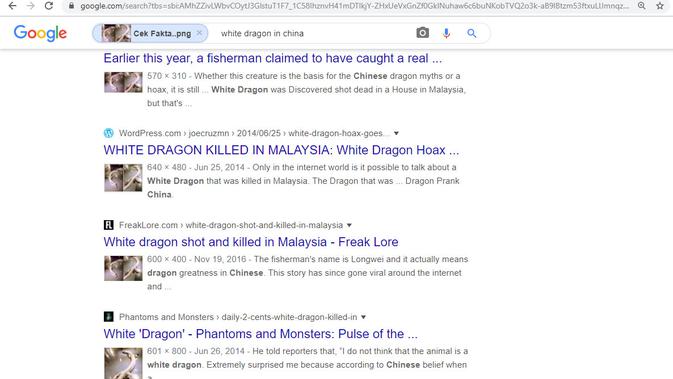 They say that you shouldn't trust everything that you see/read/hear via the interwebs. Time and time again, the saying has proven to be true. Recently, images of a mythical creature “found” in Perak before it was “found” in Johor Bahru went viral, mostly because it was rampantly shared via Facebook.

According to this Facebook user, the “story” originated from a Malaysiakini report – the source of which we haven’t found. It said that a “Naga putih” aka white dragon has been shot dead. Yes, as in a real dragon.

owner, Boon Chin Yo, was sleeping in the 2-storey house when he was suddenly awoken by a rabbit’s screams and a weird noise, much like a tiger. He peeped from the stairs only to find a strange animal with horns and long whiskers attacking a rabbit. Out of panic, he quickly made a grab for his auto rifle and shot at it 8 times, causing the strange animal fall onto the floor. After ensuring that it was really dead, he was shocked to find that it was a white dragon with fur like a rabbit. When met with reporters, he said, “I wouldn’t have guessed that it’d turn out to be a white dragon. It shocked me.” The Chinese believe that when a dragon enters your home, it’s supposed to bring luck and its horns can fetch thousands of ringgit. Meanwhile, Boon Chin Yo confirmed that he has no plans to sell the white dragon because it’s likely that it’d end up preserved for public viewing.

We know this because the same pictures were used in a Weibo post, claiming that the “dragon” was “found” in Thailand.

In fact, this Tumblr shared the said pictures accompanied with an entirely differently story:

The Chinese weibo and weixin are circulating the images of the “dragon”, it is yet unknown if the dragon is real, or if it’s not whatever animal this is. The man that found it, says that he heard weird bird noises in his yard when it was raining, he thought a bird might be hurt, but the man was surprised, when he saw ” a dragon” when he arrived at the scene. It is not known whether the animal is a real dragon or a strangely mutated animal, but the fact remains that the animal was hurt, it is still alive, and a man that posted his pictures on his social media is asking people if they think it is indeed a dragon, and even if it’s not how to treat him, we all hope that that “animal” will recover soon.After which, these pictures surfaced and were shared via Twitter and Facebook,proving that it was indeed just a prank! What people thought was a legit whitedragon was actually just a sculpture of some sort.

“A” for effort though, it definitely got a lot of people curious.